As some people may be aware I am a great fan of Dave Murray from Iron Maiden and did say I am creating a lesson to show off his style of playing. Maiden has often relied on guitar parts to bring things to life nothing is hard would you believe it no part of the guitar part is rock hard. I looked at the solo work and Dave tends to use a lot of legato playing and sticks in minor scale, minor blues or Dorian. The work of Maiden guitar players like Dave is very straight forward and so unbelievable he gets away with just sticking around in boxes and it works.

The example I am about to show you are all from the early days some of which I turn into my own work of art using the ideas from Maiden but you will never loos that Maiden sound.

Example 3 Another very interesting part is the double stops. All this is playing two notes in one go. Dave uses this technique when making a run although he probably never notice it but I do feel that it might have come from he blues playing days. He was into blues in a big way so it became apart of something that he now does.

Example 4 Look out for the double stops on this run Dave seems to get away with it and so should you. Nice little run just think of E minor on the 12 fret and you be fine also if you can't get the speed at 160 bmp then try it slow and it will sound different but it will be a help as well. Also notice something new? Take a look at the E minor pentatonic can you see which note is added now? If now the E is now E Blues scale flatted 5th if I am right

Example 5 Much same sticking around the 12 fret creating a run this is basic Iron Maiden so how do they get away with it? The thing I have found is they do leave gaps when solo is taking place giving like a question and answer session playing on the Guitar. As you can see nothing really hard must if not all Maiden stuff never fly's around at a beat of 200 say. So since this solo starts on the root and ends on a root note and played like all the rest in a box you should have no trouble

Example 6 We now move to the new style of Maiden if one ever existed? okay lets have a look at the title song Man on the edge this is once more shows of Dave style of playing but will not give you the full solo due to copyright and I don't want to be kicked from doing my lessons. Hope you understand! Notice that you have pull offs, bends, vibrato, and double stops then unison bends as well at the end. The unison you should pick the sting bent to the correct note. Look harder than it actually is just take your time and you get it very quickly. 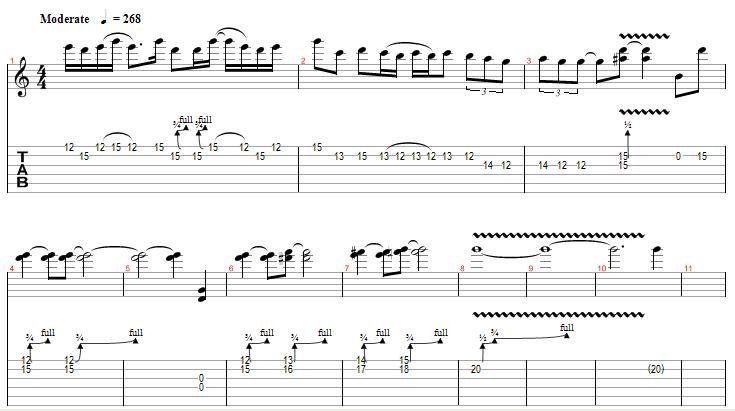