The Bebop Scale has the benefits of outlining the chord it is being played over, because it’s root scale comes from modes of the Major Scale and the Harmonic Minor Scale depending on which Bebop Scale you are using. As well, the added chromatic notes give these scales a “jazzy” flavour that you just don’t get when using traditional scales and modes such as Major, Dorian and Mixolydian.

Recently, I’ve started covering this in detail, going through each of the different Bebop Scales, how they’re built, where they can be applied and how to use them so they sound like music and not like an exercise. Since people I know have enjoyed these lessons, I thought I would write that information here for everyone to check out.

If Bebop Scales are new to you at this point, take things slow. Start with the Minor Bebop Scale and work it thoroughly before going on to the next scale that I'll list. Because these scales use chromatic notes, ones that are “outside” the sound of the chord, they can be a bit harsh at first. By learning these scales slowly, as well as the licks in each section, you’ll not only get these ideas under your fingers, but in your ears as well. This will allow you to insert these sounds into your solos more naturally, as your ears will start to hear these outside notes as normal after a while.

Just a note for practising this...

All of the exercises in this lesson are written out in the key of C major, so Dm , G7, Cmaj7, or C minor, Dm7b5, G7alt Cm7. Make sure to take all of these exercises into the other 11 keys, both on their own and as part of the ii-V-I progression included in the examples.

As well, once you can play each scale up and down in one and two-octave fingerings, it’s a great idea to learn it in other parts of the neck, as well as run common patterns through each scale. I will write more on this a little later. (Reference link to come)

or in the key of Dm

With the Minor Bebop scale under your fingers and in your ears, you can check out a lick that uses this scale over the iim7 chord of a iim7-V7-Imaj7 progression in the key of C major. Notice how the first half of the Dm7 bar is an ascending arpeggio, followed by a descending Bebop scale in the second half. This is a common approach that many great jazz guitarists used, including Joe Pass and Wes Montgomery who loved this melodic phrasing, so it is worth checking out as much as possible in your practicing so that it creeps its way into your playing.

I will write more on this later in a separate lesson. This is just a start to give you an idea of this particular feel.

The Dominant Bebop Scale, which is sometimes just referred to as the Bebop Scale since it’s the most commonly used of all the Bebop Scales, is built by taking a Mixolydian Mode and adding in an extra major 7th interval. This scale is used to solo over a 7th chord, such as the 7th chords in a Blues progression or the V7 in a ii-V-I progression, and all 7th chord variations such as 9th and 13ths.

In the following lick, you can see and hear the Dominant Bebop Scale being used over the G7 chord. The first three notes of that bar, bar 2, use a common Bebop melodic technique called the Enclosure. This is where you play one chromatic note above a target note, in this case the Root G, then one chromatic note below the target, before resolving to the target note itself. This approach, the Enclosure, also works very well on the 2nd, 5th, 6th and 7th notes of the scale.

With the Minor and Dominant Bebop Scales learned, you can now combine then into the same progression. In the following lick, you’ll be using the D Minor Bebop Scale in the first bar, followed by the G Dominant Bebop Scale in bar two. Notice the enclosure on the first note of bar two, C-A#-B, around the third of G7, which is the same technique as the previous lick, only targeting the third instead of the root of the chord.

Personally one of my favourites. Along with mixing the Minor and Dominant Bebop Scales together in the context of one four-bar phrase, you can also mix them together to form a longer scale, which I call the Minor-Dominant Bebop Scale. This scale can be used to solo over either a m7 chord, a 7th chord or both. So, in the key of C major, you could use this scale to solo over Dm7 and/or G7.


Notice how the scale is just like G Mixolydian, with an added major 7th and augmented 4th, from the two Bebop Scales, or you can also think of it as D Dorian with an added Major 3rd and Major 7th added in, the same two chromatic notes.

Try coming up with some licks of your own that use the combined Minor Dominant Bebop Scale. This scale fits great on the guitar, and the two extra chromatic notes really add some spice to your lines, either over a static chord or in the context of a longer progression such as a ii-V-I. Applying everything that you learn is the only way to improve - don't just keep this knowledge in your head! Express yourself musically.

or in the key of Cmaj7

The following lick uses the Major Bebop Scale in bar three, over the Cmaj7 chord. Notice that I used a tie, a held note, to keep the Ab note on the off beat, between beats three and four on the bar. Some people believe that the chromatic notes from any Bebop Scale should only be used on the off beats, but there are others that believe they can go anywhere. I’m of the belief that it’s a good place to start, putting the chromatic notes on the off beats, but that as you get these sounds in your ears you can then move on to putting them on the beats as well. It’s a matter of taste more than a rule. As Charlie Parker once said "Learn the rules than forget them." - this quote will become more and more understandable with every day's advancing practice.

You can also take all three of the Bebop Scales you’ve learned so far, Minor-Dominant-Major, and use them over each chord in a ii-V-I progression. Here is an example of a lick that uses each of those scales in one longer phrase. The lick in bar one, over Dm7, is a popular lick that was used often by Joe Pass and Pat Martino. Check that lick out, very cool sound.

As well as being able to use Bebop Scales in major keys, you can also use them in minor keys. This first scale, the Altered Bebop Scale 1, can be used over both the iim7b5 and V7alt chord in a iim7b5-V7alt-im7 progression. The scale is built from the fifth mode of Harmonic Minor, with an added #7 included in the scale.

This scale is a little different from the traditional “Altered” sound you might be used, built from the 7th mode of Melodic Minor, as it has a natural 5th and no #9, but the b9 and b13 intervals found in this scale give a nice amount of tension when used over any 7alt chord.

or in the key of G7alt

or in the key of G7alt

Here’s a lick that uses the Altered Bebop Scale 2 over the G7alt chord in the second bar of this iim7b5-V7alt-imMaj7 chord progression. Notice how I just ran down the Bb Dominant Bebop Scale from top to bottom, which would normally sound boring over Bb7, but it sounds “hip” over a G7alt chord. Also, take note of the lick in bars three and four. This is a very common lick that is worth taking out of context and learning all over the neck, in all 12 keys, since it is such a big part of the jazz vocabulary.

Now for the tricky part! When practising Bebop Scales, I like to use the tune “Blue Bossa” as a vehicle for applying these scales to a performance situation. The song uses all of the Bebop Scales mentioned in this lesson, and moves them around the neck, so it’s perfect for studying these sounds within the context of a tune.

Here are some ways I like to have my students work on Blue Bossa with Bebop Scales:

After you’ve worked out some or all of the scales in this lesson, take them through Blue Bossa. Not only will you get your Bebop Scales happening over a common tune, but you’ll add a new song to your repertoire at the same time. 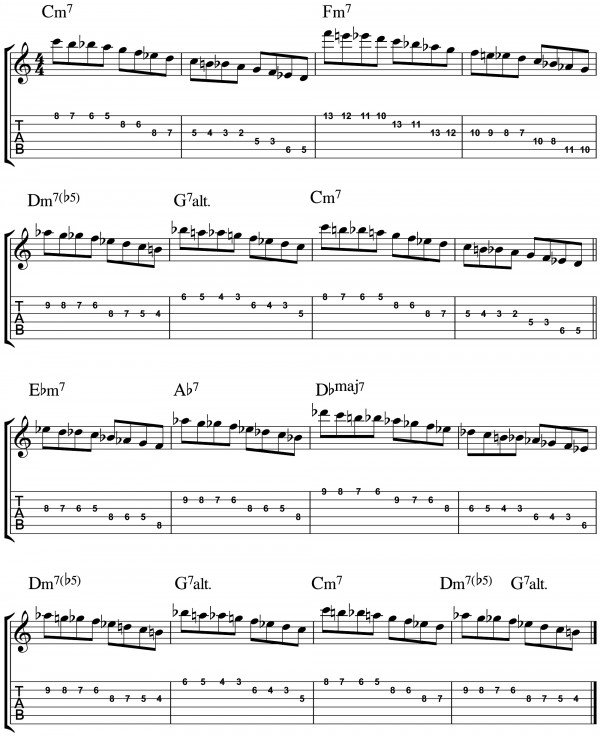 Here's Jazz in the City's recording of the Blue Bossa Track and this may be one of the ways you can get an idea on how to incorporate your own style into anything you play.

Feel free to ask me any questions!